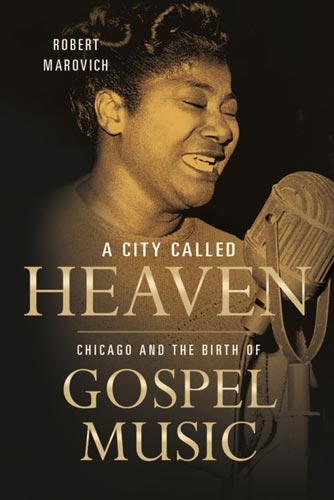 A City Called Heaven: Chicago and the Birth of Gospel Music.

The music that helped free a people and lift a nation

In A City Called Heaven, gospel announcer and music historian Robert Marovich shines a light on the humble origins of a majestic genre and its indispensable bond to the city where it found its voice: Chicago.

Marovich follows gospel music from early hymns and camp meetings through the Great Migration that brought it to Chicago. In time, the music grew into the sanctified soundtrack of the city’s mainline black Protestant churches. In addition to drawing on print media and ephemera, Marovich mines hours of interviews with nearly fifty artists, ministers, and historians–as well as discussions with relatives and friends of past gospel pioneers–to recover many forgotten singers, musicians, songwriters, and industry leaders. He also examines how a lack of economic opportunity bred an entrepreneurial spirit that fueled gospel music’s rise to popularity and opened a gate to social mobility for a number of its practitioners. As Marovich shows, gospel music expressed a yearning for freedom from earthly pains, racial prejudice, and life’s hardships. In the end, it proved to be a sound too mighty and too joyous for even church walls to hold.