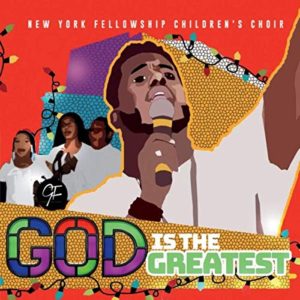 As any elementary school teacher will tell you, it can be challenging to get young people to work together for a common purpose. But the New York Fellowship Children’s Choir has accomplished this feat and recorded the results on its debut album, God is the Greatest.

As such, the songs on God is the Greatest aren’t oversimplified to meet the skill level of a children’s choir, but with the exception of a raw note or two, that doesn’t seem to matter. As can be expected, the CD is highly spirited and doesn’t relax until the ballad “We Are One,” a lyrically-appropriate song for a kids’ choir, though the reprise goes on a little too long.

Naturally, the children cover a few Timothy Wright selections, notably “I’m In Love,” “We are One,” and the buoyant “Sunshine in My Soul.” The title track and current single is ready-made for a children’s chorus, though for my money, “I’m in Love” and “He’s Everything” shine brightest. Another highlight is the pew-burner “Child of the King.” “Stop the Violence” is a cry to end violence of all types, and to augment its message, the song concludes over an audio montage of news reports detailing instances of domestic and international terrorism.

While Pastor David Wright solos on a couple of tracks and can be heard encouraging the youth throughout the project, most of the solos are given over to the choristers themselves.

The musicians play with the same funky verve they use to support adult ensembles. The overall energetic vibe and the enthusiasm in which the youth sing are what sell this CD. God is the Greatest doesn’t rest on its cute factor, though a companion DVD, if it doesn’t already exist, would capture the charm of watching the children having fun while praising the Lord.