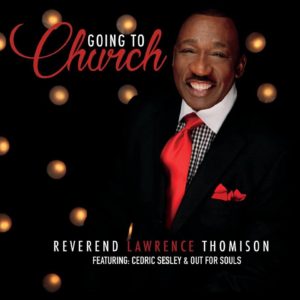 Going to Church, the latest release by the Reverend Lawrence Thomison, lives up to its billing.

Produced by Derrick Lee for Dherico Music, Going to Church is an album of songs rendered in an older style by the full-throated Cedric Sesley & Out 4 Souls choir and soloist Thomison, who demonstrates that he can shout and squall like a quartet singer-turned-Baptist preacher.

Despite the album’s old-school modality, the rhythm section, and especially Kenny Jackson’s thumping bass, keeps the musical body firmly fixed in contemporary territory. Two divergent examples include the energetic opening rhythm-and-praise “Holy is Our God” and “He Never Fails,” which telegraphs its traditional roots through the inviting chortle of Lance Lucas’s organ work.

The selections written by a variety of songwriters have nuanced arrangements that push the choir into complex territory, as on the magisterial “I Can Go to the Rock,” where the ensemble sings with senior choir solemnity. “He Straightened Me Out,” featuring DeWitt Johnson, has an O’Neal Twins flavor in its meaty two-part male harmony and honest lyrics about being saved. “We Lift You Up,” led by female vocalist Lynn Brown, is a gentle hymn with gospel flourishes.

The album’s most rousing selection, the antiphonal and revelatory “He’s Coming Back,” is an up-tempo aisle-walker reminiscent of Chicago’s Cosmopolitan Church of Prayer Choir but without the washboard and tambourines.

Thomison and the choir takes the closing track, “Bye and Bye,” better known as “Farther Along,” slower than usual, with a solo that evokes “no more heartaches” and “no more diabetes” among the blessings awaiting the faithful who make it past the Golden Gates. As if to hammer home the premise, the ensemble interpolates “Great Gettin’ Up Morning.” And as can happen with a slow and simmering gospel song, the emotion builds to a praise break.

The Reverend Lawrence Thomison of Nashville’s Temple Church introduced himself to the national public in 1992 with the Music City Mass Choir’s chart-topping “You’ve Been Good to Me” (New Haven Records), also produced by Derrick Lee, and as a regular member and lead vocalist with Ambassador Dr. Bobby Jones and the Nashville Super Choir. His choir chops are evident throughout the album.

Would that Going to Church have been longer than eight songs, but still there’s a lot of bang here for the buck.