Zak Williams & 1/Akord – The Next Chapter 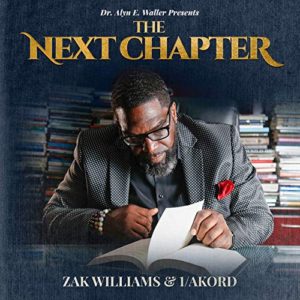 While the name Zak Williams & 1/Akord sounds like it might be a male-led gospel group, the group is actually a small choir.

And on the group’s latest offering, The Next Chapter, the ensemble sings with the full-throated and thunderous sonority of a choir twice its size.

The album, presented by Dr. Alyn E. Waller, Pastor of Philadelphia’s Enon Tabernacle Church and produced by Zak Williams, features songs written by a variety of songwriters, including Williams himself.

“Unpredictable God” is the radio-friendly single but its predictability makes it less of a standout track than a few others on the album. For example, “Rejoice,” is a bouncy, cheerful invitational song and the ensemble sings the stuffing out of it. D. Corey Shipley’s magisterial P&W piece “He Reigns” gets an appropriately dramatic and powerful reading from top to bottom.

The album’s most soul-stirring moments, however, happen during “Mommy’s Medley.” It’s an assortment of “Sunday morning songs,” that, as Williams explains, were staples in the Macedonia Free Will Baptist Church, where he was raised. The medley is dedicated to the memory of Williams’ mother, Rosalie, and includes snippets of songs such as “Heaven Belongs to You” and “Caught Up to Meet Him.” The song’s fiery soloist (and Williams’ aunt) Deborah Freeman Williams has since passed away, giving the eschatological focus of the medley even more poignancy.

Rendered with the simplicity and speed of a Church of God in Christ song, Ernest Billups’ “I’m Glad I Did” concludes the project on a high note of gratitude to the Lord.

Bounding back and forth between P&W and straightforward traditional gospel music, The Next Chapter is worth opening.