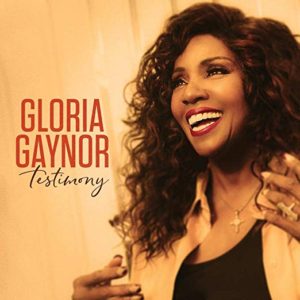 From time to time, such as on major holidays or when the young people’s choir was singing, young Gloria Fowles and her family accompanied their grandmother to Abyssinian Baptist Church in Newark, New Jersey.

At Abyssinian, they would listen to sermons from its pastor, the Reverend Raphus P. Means, and gospel music from such leading lights as Professor Alex Bradford, the Gospel Clefs’ Leon Lumpkins, and young gospel singer Kenneth Glover. Gloria also enjoyed the music of another Newark native, Sarah Vaughan.

In the 1970s, Gloria Fowles, better known as Gloria Gaynor, became an internationally-successful R&B and disco star after covering the Jackson 5 hit “Never Can Say Goodbye” in 1975 and recording the now iconic dance hit, “I Will Survive,” in 1978.

Although “I Will Survive” is an inspirational anthem in its own right, Gaynor hadn’t cut a gospel album in her nearly fifty-year career in show business. But she wanted to.

“I wanted to do [a gospel album] ever since I came over, with knowledge, to the Lord,” Gaynor told the Journal of Gospel Music. “The Lord had given me a voice to sing and the knowledge of God. But the management that I had was more concerned with me making money and believed that I couldn’t make money singing gospel music. So they kept stalling and it never happened. My new manager, Stephanie Gold, she’s wonderful and she respects me and my desires and designs for my life.”

In 2013, Gaynor self-released her first gospel album, We Will Survive, in conjunction with the release of her book of the same name.

Gaynor’s second gospel album, Testimony, released this past June, and her first on a label, has been nominated for a Grammy Award. A single, “Talkin’ Bout Jesus,” featuring Yolanda Adams, is also up for a Grammy.

One of Gaynor’s personal favorites on Testimony, “Back on Top,” has all the elements of autobiography. “It is definitely autobiographical,” she said. “I’ve gone through quite a few changes in my life and in my career, and I felt I was being held back. Not necessarily knowingly—I don’t think it was intentional, but I was definitely being held back. Then again, sometimes I wonder if I was being held back by the Lord because the timing wasn’t right. This album proved that to me, because out of the box, it went to number three on the charts, just below Kirk Franklin!”

Gaynor has experienced her share of highs and lows. “I Will Survive,” for example, came into being after a tragic accident that could have been far worse. While performing on stage in the mid-1970s, Gaynor fell backwards over a monitor. “I jumped back up and finished my show,” she said. “Went out to breakfast afterwards, went home, went to sleep, woke up, and the next morning, I was paralyzed from the waist down.”

The singer underwent surgery and eventually recovered, but Polydor, her record label at the time, decided not to renew her contract. “People were going around the company saying ‘the queen is dead,’ she said. “I was devastated. I didn’t know anything else to do.”

Gaynor had gone to business college on the advice of her mother, but she wasn’t terribly interested in getting an office job. “I wanted to sing, but I didn’t know if I’d be able to. I just turned to the Lord and asked Him what was I going to do? I was confident He would do something for me—I just didn’t know what. A few weeks later, the record company called me back and said they had a new president from England who was going to renew my contract.”

More specifically, the new Polydor president wanted her to record a song called “Substitute.” The song had made noise in England via a recording by a South African girl group called Clout and the company was convinced it could do well in the U.S.

“We went out to California to record the song,” Gaynor said. “When I got there, the producers wanted to know what song was going to be on the B-side. They asked me what songs I liked. I said I liked songs that are meaningful and that capture people’s hearts, songs that have good melodies. They said I was the one they were waiting for to record a song they had written two years ago.”

That song was “I Will Survive.”

Years later, after Gaynor fully embraced Christianity, she expressed an interest in recording a gospel album. Record companies looked askance at her. “I was labeled as a disco act,” she said. “How can a disco act sing gospel? I thought, ‘Do you really know the Lord? Because if you do, you know He will save anybody from anywhere.’”

Released by the Gaither Music Group and produced by Chris Stevens (TobyMac, Mandisa) and F. Reid Shippen (India.Arie, Death Cab for Cutie), Testimony is Gaynor’s first full-length gospel album. It also represents the first time she recorded at Nashville’s storied RCA Studio A. “When I got there and learned about all of the great acts that have gone on before me, through that studio,” she said, “it was just amazing and quite an honor to even be there.”

Outside of “Amazing Grace,” “Precious Lord,” and Bob Dylan’s “Man of Peace,” Gaynor wrote or co-wrote the lyrics to the album’s songs.

“In the past, [lyrics have] always been something that have come out of my life, something that happened that I wanted to share through music,” she said. “But in the past five to ten years, I sit in my prayer closet and [the words] just come. I feel them bubbling up inside me. I grab my cell phone, put it on dictate, and the words just come.” She relies on others to put the melody to her words.

One of her co-writers on Testimony is Bart Millard, leader of the Christian band MercyMe. “He’s such a sweetheart!” she said. “We wrote a song and then he decided he didn’t want to sing that song, he wanted to sing another song! Jason Crabb did the exact same thing. But they were both wonderful to work with. I love them both.”

Gaynor also enjoyed singing with Yolanda Adams on the current single, “Talkin’ Bout Jesus.” “What a wonderful lady she is,” Gaynor remarked, “so talented and sweet and kind and generous and gorgeous.”

She adds that while including “Man of Peace” on the album was Chris Stevens’ idea, “The minute I heard it, I said yeah! I can’t wait to hear from Bob Dylan, to hear what he thinks about it.”

She continued: “My purpose with this album is not to make music for somebody to wash dishes by, but an album that will minister to their heart and soul. That’s what I’ve been doing. I feel like mission accomplished.”

Nevertheless, Gaynor plans on recording additional gospel albums and hopes Stevens will “come along with me and put his stamp on it.”

In the meantime, she will be at the Grammy Awards ceremony in January 2020. “I’m hoping to win so I can finally balance out my piano,” she remarked. “I have one Grammy from 1980 sitting on the side of the piano, and I hope to balance it out.

“And,” she winks, “if I get a second one, you know that the triangle is the strongest shape in nature!”