Janice Gaines on Living the Greatest Life Ever 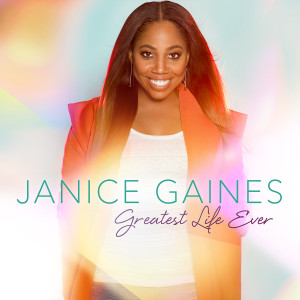 Not that she would have called it her bucket list, but a young Janice Gaines had three childhood aspirations.

She laughed. “I’ve done everything but be on ‘Wheel of Fortune!’”

Born in St. Louis but reared in Memphis, Janice had a front row seat for performances by her “unofficial music mentor,” her mother, Jackie Reddick. Singer, songwriter, pianist, minister of music, and member of a Top 40 band, Reddick covered songs by Gladys Knight, Whitney Houston, and Aretha Franklin, among others. She also wrote for Memphis gospel choir O’Landa Draper & the Associates; a teenaged Janice became the choir’s youngest member.

Although surrounded by music, Janice found the prospect of a full-time career in music terrifying “because of its lack of predictability. So for years I went the academic route, because I also liked school.”

Graduating college with a degree in economics, Janice taught seventh grade math at a Bronx school. She soon discovered that singing helped coax good behavior from her young pupils.

“I would give my students a choice,” she recalled. “If you behave this week, then on Friday, I will either sing a song or you can teach me a new dance. Most often, they chose for me to sing them a song. Using singing to get them to behave helped me realize that [singing] was a gift I should not hoard. Maybe I should trust God.”

About the same time, industry veteran Monica Coates, who worked with singer Joann Rosario and Verity Gospel and is now with Kirk Franklin, was completing a book called The Beginner’s Guide to the Gospel Music Industry. She asked Janice and Janice’s husband, attorney and founder of GospelPundit.com E. J. Gaines, to read through the draft.

Janice said: “The first chapter challenged the reader to ask the Lord what he wanted them to do with their gift. Being the nerd I was, I thought I should do the exercise myself, to be a good friend and a good draft reader. I came away from that exercise hearing the Lord say that I should trust him to sing. I wasn’t expecting that. That was the critical turning point. That’s when I stepped out, and said, ‘Okay, I’m going to sing now, and I’m going to sing gospel music.’”

Her introduction to the larger gospel music community came through her first single, “One Day.”

Janice recounts how the song came into being. “My husband and I moved from New York to Nashville and started attending Grace Chapel. Our pastor and his wife had just lost their son by way of a car accident and they started reading a lot about heaven and teaching about heaven. I thought, ‘Lord, I need you to give me a picture of what we can expect from heaven. What is the hope of heaven when you are in the middle of grief?’ The Lord gave me a picture of life on earth as like a child in the womb: the child is alive but has not been birthed yet. You can’t explain to the fetus in the womb the goodness and the freedom of life outside of the womb. Heaven is like that: being born into life.”

Janice asked Dwan Hill and CeCe Winans’s son Alvin Love III to help her complete the second verse “and to organize the song in a way that it would make sense to everybody.”

While “One Day” was a critical success, including being selected by the Journal of Gospel Music (then known as The Black Gospel Blog) as among its best singles of 2012, it failed to garner the broader attention for which Janice had hoped. She became discouraged and asked the Lord whether gospel music was truly what she was supposed to do.

“He shared with me that this was the right way and that he was with me. After that, I thought, well, this is my job, this is my responsibility, this is the ministry the Lord has given me. If he’s not giving me another job, then I’ve got to keep going, no matter who supports, how or when or where.”

She added: “Plus, I have a pretty extreme personality. It’s all or nothing, so once I decided to go for it, I was pretty much going for it. I was all in.”

Janice organized a music showcase to introduce herself to the gospel music industry. Ken Pennell of Motown Gospel attended the showcase, liked what he heard, and began conversations with the singer and her manager/husband.

As it happened, award-winning producer LaShawn “Big Shizz” Daniels had also heard “One Day.”  “LaShawn heard the same music that I thought nobody was listening to,” Janice said, “and that’s how the Lord opened many doors for me.”

Today, Motown Gospel is releasing Janice’s debut solo album, Greatest Life Ever. She shared the significance of the album title.

“Having come through really happy seasons and really hard seasons, I’ve learned that life with Jesus is the greatest life that we could possibly live. It does not mean that it is always easy, but Jesus brings us hope in the hard times and makes the good times even greater. That’s my message: this is the greatest life ever. It has nothing to do with your circumstances and everything to do with your choice for Jesus.”

“Wait on You,” co-written by Janice and producer Daniels, is the album’s first single and currently garnering radio spins.

“It was the very first song LaShawn and I did together,” Janice said. “I was nervous, because LaShawn had worked with people like Michael Jackson and Whitney Houston. But we decided, ‘Let’s make good music and not shy away from the message of Jesus.’ That was our goal. We realized we had great musical chemistry and that this was going to be fun.”

“It’s really Hosea 10:12,” Janice explains, “when God says, ‘Break up the solid ground of your heart and sow seeds of righteousness.’ It’s about our responsibility to live the greatest life ever and prepare the soil of our hearts to hear the Lord, receive the Lord, and live the life God is calling us to live, so we can produce fruit in our lives.”

Janice will remain part of Erica Campbell’s Help 2.0 tour, and plans to promote the new album are in the works.

She hopes to grab some alone time in the midst of today’s CD release frenzy. “I want to take a moment to myself to just be giddy, and jump up and down, because I can’t believe this day is here and everybody can finally hear what I’ve worked so hard on.”

And if you see Janice Gaines on “Wheel of Fortune” sometime soon, know that she is three for three on childhood wishes coming true.