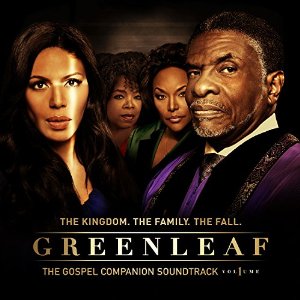 Greenleaf, the OWN television series about a family-run megachurch in Memphis, features a cast that includes Merle Dandridge, Keith David, Lynn Whitfield, Deborah Joy Winans, and Oprah Winfrey, who is also one of the show’s executive producers. The fourteen-track first volume reinforces in song the program’s themes of belief, the vulnerability of faith when confronted with the vicissitudes of life and the frailty of humanity, and love as a many faceted thing.

In addition to introducing the lovely singing of actress Deborah Joy Winans, who shines best on the chilling “The Master’s Calling,” the soundtrack also features such luminaries as Mavis Staples, the McCrary Sisters, Dottie Peoples, and Pastor Shirley Caesar. Songwriters and producers involved in the project include BeBe Winans and Fred Hammond.

Staples handles “The Root,” the show’s main title theme, in her typically rootsy way (pardon the pun). When she sings that the root of everything is love, she telegraphs the show’s main motive.

Indeed, love is a key element in several of the songs, notably “(God Bless) the Broken Road,” “Let Love Find a Way,” the aforementioned “The Root,” and “Say Something.” Listened to out of context, as I did, one could construe the love expressed in these songs as either of the Most High or of a lover, family, or community. For example, on a cover of the Rascal Flatts hit, “(God Bless) the Broken Road,” Winans sings about the “broken road that brings me back to you,” with the “you” open for interpretation. No matter: love is love, regardless of the intended recipient. As Victor Hugo wrote in Les Miserables: “To love another person is to see the face of God.”

The soundtrack songs based on, or culled directly from, traditional gospel music are rendered with earthy conviction. Accompanied by feet stomping out a marching beat, Shirley Caesar’s “Satan, We’re Gonna Tear Your Kingdom Down” features an old-fashioned call and response with a choir of congregants. The feet appear again with equal motive force in Dottie Peoples’ declarative “Get Your House in Order,” recorded in church and accompanied by the Peoples Choice Chorale. Winans leads “Testimony,” a gospel rocker with Mary Mary-esque verses and a chorus driven by Pentecostal fervor and velocity. The shoulder-shaker “Blessed” interpolates lines from “Old Hundreth” (aka Doxology).

“The Master’s Calling,” already reviewed here, is the album’s standout track and one of the best songs of the year. Caesar’s “Satan” and the joyous arrangement of Rev. Charles A. Tindley’s “We’ll Understand It Better By and By,” led by Desiree Ross, are also significant, as is Winans’ dramatic “Say Something,” a prayer sung fervently during a personal crisis of faith.

There’s no selection on the Greenleaf: The Gospel Companion Soundtrack, Vol. 1 that is not melodic, lovingly rendered, and expertly produced. With the collective muscles of Malaco and OWN behind it, the album should do very well in the marketplace and will garner listeners who don’t even consider themselves sacred music fans.

Picks: “The Master’s Calling,” “Say Something,” “(We’ll Understand It Better) By and By”