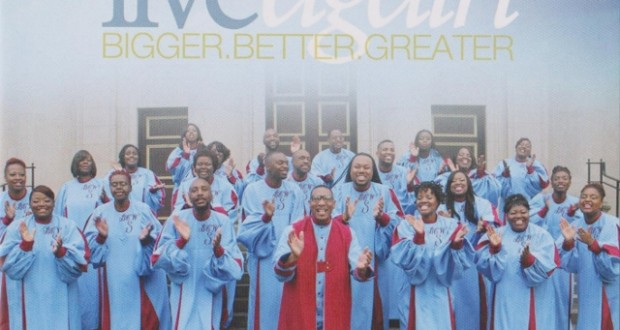 Organized in Cincinnati more than 20 years ago by singer/songwriter/musician B. Chase Williams, ShaBach is a full-throated choir that performs with zest. They follow their 2010 R3 –Redeemed! Reconciled! Released! with another rhythmically-titled album—Live Again: Bigger, Better, Greater.

As with many albums by male-led small choir, the lead vocalists on Live Again add the sparkle that distinguishes this project from others. Several singers shine on Live Again, notably Terrence Cotton on the smooth jazzy and Whitfield-esque “My Everything;” Melodi Lovely and her fiery reading of “Power,” which has all the components of a Chicago Mass Choir pewburner; and Maranda Curtis-Willis on the speaker blower, “Grace.”

Singer-songwriter Darius Paulk, Kim McFarland, and Lillian Lloyd also make appearances on the CD, as does Anthony Williams, who deserves spotlighting for his bluesy, smoky, melismatic lead on “I Shall Live” that takes on an evangelist’s fervor by the reprise. “It would not hit your mailbox if you couldn’t handle it,” Williams declares on this song about overcoming challenges.

While Williams & ShaBach traverse a variety of styles, their traditional-leaning pieces, “Power” and “I Shall Live,” are the two standouts, although “Surrender” possesses its own pretty charm.  The Radikal Krew (the band, not a New Orleans carnival organizer) provide the propulsive thrust that keeps the choir chugging along.

If there is a thematic maypole, it is the belief that faith in God, and faith in His timing, will carry you through particularly trying times. Williams can testify, having overcome personal trials that include sexual abuse as a youth and homelessness as a young adult. Nevertheless, he went on to form ShaBach, sing background for Michael Jackson, and appear in the feature film Gospel.