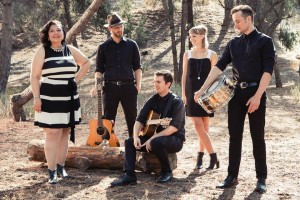 What originated as a group of friends jamming on old gospel songs distilled into the five-member Eagle Rock Gospel Singers. The Los Angeles group’s full-length debut, Heavenly Fire, declares their earthy conviction for true living through details of personal struggles and Bible tales that sound ripped from the pages of William Faulkner.

The Eagle Rock Gospel Singers blend alt-country, rockabilly, and gospel into a mix somewhere between Wilco, Neko Case, and the Staple Singers. At the same time, the group’s expansive, extroverted harmonies, fronted by Kim Garcia and Alissa Bird, evoke the over-sized ’60s folk-rock sound of the Mamas and the Papas and the Seekers.

In concert, the group is just as likely to deliver an original song as something by the Staple Singers or Washington Phillips. On Heavenly Fire, however, they stick to originals. To a steady country beat and punctuation from pedal steel, “Stephen” details the martyrdom of Saint Stephen. This song is somewhat reminiscent in tone of Johnny Cash’s Sun Records-era rockabilly take on Belshazzar. Within a wall of sound, “MMLJ” praises the four gospel writers as the sources “where I get water from.” Fueled by blasts of brass that kindle images of New Orleans funeral marches and south of the border celebrations, “Meet Me” declares that as Christian soldiers, we “may die in pain” but “not in vain.”

Two highlights are the slow and soulful, B3-drenched “Crying,” about the struggle to find inner freedom; and “Underground,” where the group intones: “I want to tell you that I love you but I don’t know how.” Of course, the irony is that they do know how, and they way they do it is refreshingly innovative.

On the title track, the group sings, “I make no apologies for my honest voice.” Nor should they. The Eagle Rock Gospel Singers are about as honest sounding as they come.