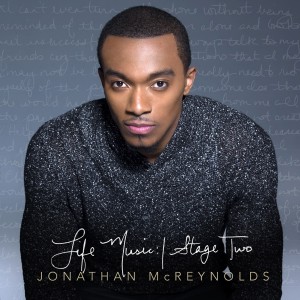 The follow-up album to the 26-year-old singer-songwriter-musician’s 2012 debut, Life Music, Stage Two is the musical manifestation of his honest and spiritually grounded approach to dealing with the vicissitudes of daily life.

The Chicago-born McReynolds is one of the few gospel solo artists who plays acoustic guitar. His mellow blend of acoustic neo-soul with churchy conviction may be somewhat novel today, but it mirrors the intimacy of his lyrics, which feel like informal conversations with God.

The convos on Stage Two cover quite a bit of ground, but are mostly plainspoken appeals for help to remain true in a world fraught with landmines of falseness. For example, “Maintain,” a duet with Chantae Cann, is a gentle prayer for daily composure. “Pressure” is a ballad about forsaking the push “to be someone you did not create.”

McReynolds surrounds himself with like-minded musicians, none more so than India.Arie. His musical sister from another mother joins him on the album’s current single, “Whole.” Their expressions of gratitude to God for keeping them on solid moral ground are raised aloft on the soft marching rhythm of Charles Lamont Garner’s drum. New generation gospel innovators PJ Morton and Warryn Campbell co-authored “Gotta Have You” with McReynolds, and Dominique Jones of foreverJONES co-wrote “Oh!” The latter is a sure-fire singalong with pop sensibility and an old soul.  Israel Houghton, a natural partner for McReynolds, duets on the very New Breed-ish P&W “All Things Well,” and Corey Barksdale appears on “Jesus.”

“Jesus” is an especially pleasant surprise.  Its neo-traditional groove is equal parts James Cleveland and Kirk Franklin.  With the B3 whirling away, it is a fitting finale to an album with many refreshing and tuneful moments, including the cerebral “Limp,” whose lyrics pretty much sum up McReynolds’ life philosophy.  Highly recommended.