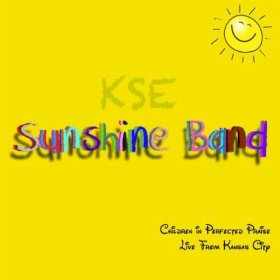 For the past century or so, tens of thousands of saints—from everyday people to sacred and secular music superstars—have come up through a sunshine band.

The forty-member Kansas East Jurisdictional Sunshine Band Recording Choir, under the direction of Sis. Jean Henderson, is one of these ensembles. In addition to their cute factor, these youth can sing. Their energy and tunefulness as a unit helped earn them a Stellar Award nomination in 2014.

While the island-flavored “Oh! What A Happy Day” is what brought the Kansas City, Missouri-based group of 3-12 year-olds to the attention of radio outlets, the exuberant “I’ve Got Joy” and the resultant “Sunshine Band Praise” are the album’s standout selections. The number of digital purchases of “Joy” on Amazon testifies to the power of this Pentecostal workout.

Kudos to the banging band of musicians, and especially the organist, drummer, and electric guitarist, the latter taking an incendiary solo during the album’s instrumental conclusion.

Well before the emergence of the School of Rock, the Sunshine Band was a School of Gospel Music.