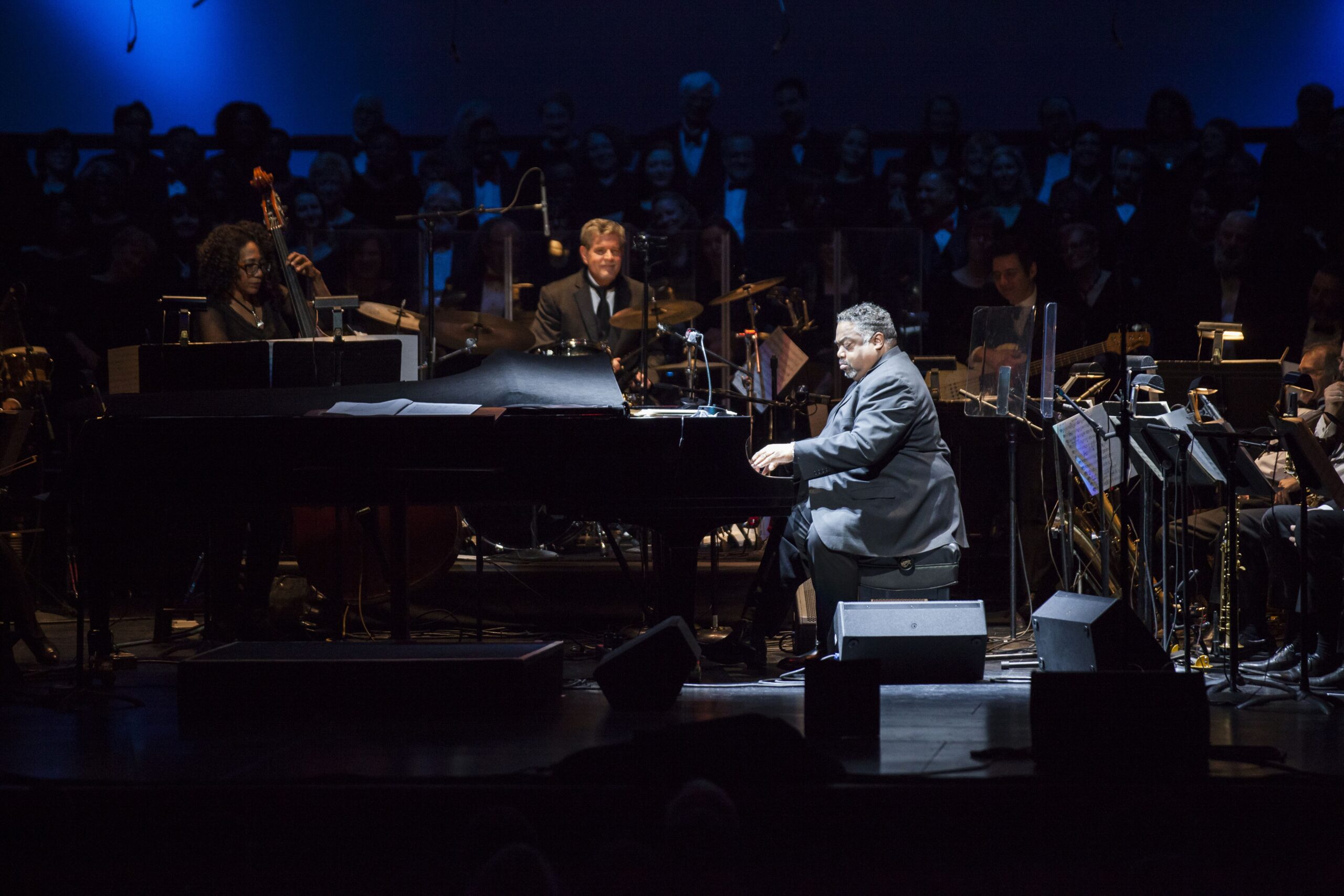 Nineteen years ago, Suzanne Mallare Acton, music director and conductor of Too Hot to Handel: The Gospel Messiah, was in a real jam.

Her pianist, Detroit jazz legend Harold McKinney, pulled out of the jazz-gospel interpretation of George Frideric Handel’s Messiah just days before opening night. Needing a musician who could read a score and improvise, she picked up the phone and called the one pianist she knew could fill both bills: Alvin Waddles.

Entering Little Rock Baptist Church in Detroit for the orchestra dress rehearsal, Waddles settled himself at at the piano and read through the score for the first time. Though he had been playing the traditional version of Handel’s eighteenth-century oratorio since age twelve, he saw immediately that this version was different.

Since then, Waddles has commanded the piano for the Detroit and Chicago performances of Too Hot to Handel. He’ll be on piano for the Saturday, December 3 performance of what is now a holiday tradition at Chicago’s Auditorium Theater, the site of the show’s Chicago premiere in 2006.

Waddles’ familiarity with classical music, jazz, and church music suited him ideally for the role. He started taking piano lessons around the age of eight, if nothing else than to better redirect his musical inclinations, he said, from “going around the house, banging on pots and pans.” His parents were not professional musicians but they loved music. They attended symphony concerts. Their “very eclectic record collection” ran from Nina Simone to Verdi. Waddles’ earliest musical inspirations came from two of their albums: one of pianist Arthur Rubenstein performing Chopin (Waddles remains a fan of Rubenstein), and a 1961 Roulette Records collaboration between Duke Ellington and Louis Armstrong.

And then there was the church music every Sunday at St. Stephen AME in Detroit, where Waddles sang in the youth choir and eventually served as accompanist. There wasn’t a lot of gospel in St. Stephen’s repertory, but there were enough hymns to inspire his lifelong love of hymnody. For formal study, Waddles attended Interlochen Arts Academy and the University Of Michigan School Of Music.

Waddles’ first professional assignment as a church pianist was for Carter Metropolitan CME in Detroit. One Sunday, the music minister of the city’s New Bethel Baptist Church happened to be in the Carter congregation. New Bethel was where Aretha Franklin’s father, the Reverend C. L. Franklin, pastored from 1946 until his death in 1984. The music minister was so impressed by Waddles’ skills that he invited him to play the Hammond organ for New Bethel. “He had greater faith in me than I had in myself,” Waddles said. “I had never been in a Baptist church in my life, that I can recall. And I’d never played a Hammond organ. I played a pipe organ at Carter but I didn’t even know how to turn a Hammond on.”

For Waddles, playing at New Bethel was “an eye-opening experience” for more than just mastering the Hammond organ. He very quickly became exposed to a large amount of traditional gospel music as well as some contemporary gospel selections. He eventually became New Bethel’s minister of music. In 1995, Waddles left New Bethel for Hope United Methodist in Southfield, Michigan, where he continues to serve as music minister under the pastor, Reverend B. Kevin Smalls, while concurrently holding the same position at Hartford Memorial Baptist Church, under Pastor Emeritus Charles Adams. “That’s my Sunday,” he said. “It’s a lot of scheduling and juggling!”

Waddles said that the official description of Too Hot to Handel as a jazz-gospel Messiah “doesn’t really begin to describe it. You have to experience it, because it’s not just jazz and gospel. There are rock influences, R&B influences. It was arranged [from Marin Alsop’s original concept] by Bob Christianson and Gary Anderson, two composers whose styles are different.”

Most daunting to Waddles at the outset of his tenure with Too Hot to Handel was the cadenza before the “Hallelujah Chorus,” “where there is absolutely nothing written. It’s just a squiggly line. I asked Suzanne [Acton], ‘What do you want here?’ And she said, ‘Oh, about five minutes!’ I said, ‘Five minutes of what?’ She said to improvise. The first time I did it, I asked a few of my colleagues to join me. I told them I had no idea what they should do, so just follow me!”

In all fairness, Waddles added, some of the score is written out, but other parts are just chord charts, “so there’s a fair amount of improvisation needed to make it come alive.” Hence, the piece can be daunting for someone unable to both improvise and read notes. “And the piano plays constantly. I don’t get a whole lot of breaks.”

If you are familiar with the traditional Messiah, Waddles said, you will recognize the melodies, but don’t bring your G. Schirmer score with you, “because you will not be able to sing along!” At the same time, he added, if you are not familiar with the Messiah, “you will enjoy it because there are so many different styles of music, eventually you will find something you like. It’s a well-written piece.”

The Saturday, December 3 Chicago performance of Too Hot to Handel begins at 7:30 p.m. The Auditorium Theatre is located at 50 E. Ida B. Wells Drive, Chicago.

For more information and tickets