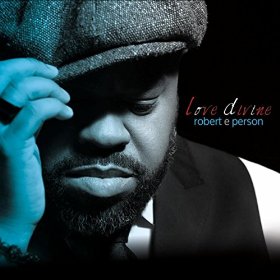 The first thing you notice when listening to Robert E. Person’s new album, Love Divine, is the bigness of the singer’s voice.

It’s Broadway musical big, regardless of whether Person is summoning deep bass notes or launching into falsetto. His repertory reflects his vocal blend, a veritable consommé of jazz, pop, gospel, and classical influences.

On one of the album’s rare uptempo selections, Person delivers Dr. Norman Hutchins’  “I Really Love You.” Person’s sweet spot, though, is the ballad, and he demonstrates that especially well on the album’s highlight, “Just Because,” written by Glyne Griffith and Melvin “Maestro” Lightford.

Speaking of Broadway, Person gives the listener more than a glimpse of his theatrical side when he duets with Dottie Jones on “Somewhere” from the smash musical West Side Story. Indeed, Person was a vocal performance student at Morehouse College and the University of the District of Columbia, and has done extensive work in musical theater.

As on his Soul Sanctuary album, Person adds a Donny Hathaway cut. Then it was “Someday We’ll All Be Free.” Here it is “Take a Love Song.”  Hathaway’s artistry remains relevant more than thirty-five years after his untimely death in 1979.

The bevy of background singers, which include Ronnette Harrison, do a more than respectable job supporting Person throughout the album. Love Divine is a gentle giant of an album.