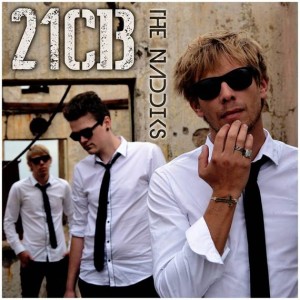 Inspiration comes from every direction, from around the world, and through all styles of music.

On their EP 21CB (i.e., 21st Century Believer), Canberra, Australia rock trio the Naddiks blend the proto-punk of Stiff Little Fingers and the Undertones (or fellow Aussies Midnight Oil without the social agenda) with inspirational lyrics that chronicle lead singer Joel Steenbergen’s journey from potential self-destruction to redemption through Christ.

Unlike the hair metal of Stryper or the mainstream sound of many Christian rock bands, the Naddiks give their lyrical tales a straight ahead pounding. The six-track EP rocks hard, with Steenbergen’s emo vocals wailing on tracks such as “21st Century Believer.” If rock was once considered the devil’s music, the Naddiks turn it back on the devil, whose trickeration is reported and rejected on “Destroy Me.”

The EP’s key track, “Human Condition,” uses two dramatic vignettes about young people who lost their lives to shake its head at the decline of societal values. “It’s sad, the human condition,” the group ponders, “where they could have been or what they could have said.” Heavy, Naddiks, but spot on.