Tonya Lewis-Taylor: Delayed But Not Denied 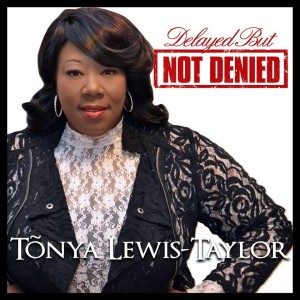 Tonya Lewis-Taylor may be the most generous gospel artist when it comes to sharing the microphone with others.

On her mostly live debut solo CD, Delayed but Not Denied, the former background singer for pop artists and one-time publicist for Roc-a-Fella Records (Jay Z, Kanye West) solicits solo turns from each background vocalist, her children, her youngest (Jaden), her mother, and, for all I know, even total strangers.

Most of the solos occur during extended pieces “The Great I Am” and especially during the twelve-plus-minute “Holding On.” Some soloists are stronger and more confident than others, but it doesn’t matter: as is the fashion in gospel music and the church, each cameo appearance gets the same level of thunderous encouragement from the assemblage.

Besides their democracy, Tonya Lewis-Taylor’s essentially praise-and-worship songs pull from the aggressive, percussive gospel ensemble style associated with the East Coast, one pioneered by Prof. Jeffrey White and the Institutional COGIC Choir (“Stretch Out”). It’s a frothy mix of church beats and contemporary melodies with complex chord structures. Album tracks that most demonstrate this musical pedigree include the single, “Thank You,” “Holding On,” and the retro “Oh!”  White’s influence, which Lewis-Taylor acknowledges in the album notes, can also be heard in the work of James Hall and JJ Hairston, and is sometimes abbreviated as Rhythm & Praise.

Still, the finest moment on the album comes when Lewis-Taylor performs the title track live. With only piano for accompaniment, she encourages listeners to remain courageous and determined, because blessings come to those who endure. “I know the race has not been won, because I’m still running,” she sings.  The message hits a particularly raw spot, though, and the singer becomes overwhelmed with emotion towards the end. Although the album concludes with a studio version of the song, the intimacy of the live piano and vocal is superior, as it always is in gospel.

Picks: “Thank You,” “Delayed but Not Denied” (live version)