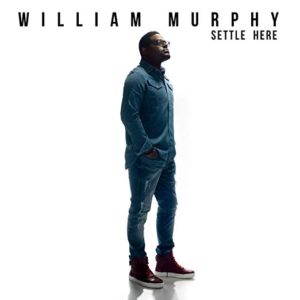 Recorded live on a rainy evening at Atlanta’s dReam Center Church, where Murphy is worship leader, Settle Here offers ten superb P&W songs instead of replicating a worship service, warts and all, in lockstep fashion.

For example, the album opens not with the almost compulsory cookie-cutter aerobic praise piece but with Christian artist Zach Williams’ dramatic “Chain Breaker.” The song, recorded previously by Angela “Missy” Billups, is an excellent vehicle for Murphy’s husky, pulpit-honed voice.

The album’s mood is essentially relaxed and melodic with sudden bursts of sanctified energy. Most importantly, the selections sound distinct from one another, giving praise teams a bushel full of songs to learn. Each song receives solid support from cheerful backing vocalists and a team of musicians that includes Gerald Haddon, the dReam Center’s music minister and member of the contemporary quartet the Soul Seekers.

“Bliss” is a gentle worship ballad filled with creamy harmonies and a melody that evokes the songwriting of VaShawn Mitchell. Murphy’s demonstrative singing and fiery preaching at the end of “Love Never Fails” so stirs the congregation, and apparently Murphy himself, that it moves the entire company into a praise break. “The devil tried it, but I’m still here,” sing Murphy and the backing vocalists and, very likely, the live recording audience along with them.

Though well sung and arranged, the two-part, ten-plus-minute title track is the least distinctive cut on the album, though its slow, hypnotic movement gives the assemblage a chance to cool down from the spiritual agitation of “Love Never Fails.” It’s followed by the relaxed 1990s mass choir vibe of “Same Grace,” a melodic song that Murphy twice tells the audience wasn’t supposed to be on the album, but it’s a good thing it was included.

The energetic conclusion, “Worship Forever,” was written by Murphy’s brother DeVaughn, who passed away in July 2017 at age 33.

Each of Murphy’s six solo albums have charted on Billboard, and given the quality of its songs and presentations, Settle Here will very likely join them.