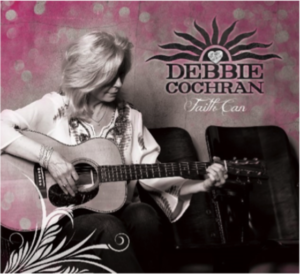 “Faith Can”
Debbie Cochran
From the album Faith Can
(single released September 2, 2016)
www.cdbaby.com/cd/debbiecochran5

That’s what you get with “Faith Can,” a country ballad composed and sung by country singer-songwriter Debbie Cochran to celebrate the courage of fourteen-year-old competitive gymnast Kate Foster.

Foster’s acute myeloid leukemia indirectly caused her to lose half of her left leg but none of her passion or conviction for life. Now wearing a prosthetic leg, Foster is back in training. Her appearance in a television commercial for St. Jude Children’s Research Hospital in Memphis brought it home for Cochran, who had whispered a prayer while passing the pink hospital campus many times on her way to the recording studio in Franklin, Tennessee.

“Not long ago,” Cochran said, “I discovered one Sunday morning Kate’s grandparents sat behind me in church. It was at that moment the lyrics of ‘Faith Can’ were written on my heart. When I think of Kate, I think of St. Jude. Together they moved a mountain.”

A testimony that modern-day miracles can and do happen, “Faith Can” is the title track of Cochran’s new album. Ten percent of album sales will be donated to St. Jude Children’s Research Hospital.