My Tribute is Myron Butler’s Tribute to Andrae’ Crouch 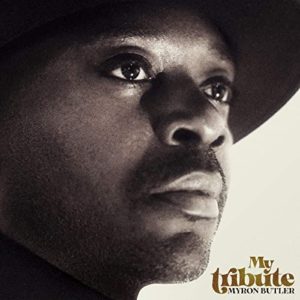 Where are the musical tributes to the one who wrote “My Tribute?” Who is remembering the man who taught the world to “Always Remember” Jesus?

Myron Butler wanted to know. Then he took matters into his own hands.

Butler, a multiple Grammy and Stellar-Award winning gospel artist, is releasing a multi-artist collection called My Tribute (Fair Trade / Columbia / Red Alliance Media) to pay homage to Andrae’ Crouch, one of the most influential singer-songwriters of the past fifty years. This exploration of the Crouch songbook is scheduled for release on Friday, June 26, five days before what would have been Crouch’s 78th birthday.

“In jazz, there are tribute records—they don’t call them that—but there are albums like Ella Fitzgerald Sings Gershwin,” Butler told the Journal of Gospel Music in a telephone interview last week. “Nothing like that had really been done in gospel where a current artist went and intentionally did a whole album of one artist. I believe the younger generations have to be introduced to the music that paved the way for them.”

But rather than send youth to YouTube to listen to the originals or cover the songs with exact fidelity to the original, Butler believes the classic gospel songs should be “repurposed for every generation’s ears.” That is what Butler and the artists on My Tribute have done.

Butler has been an Andrae’ Crouch fan since grammar school, when he first heard “Jesus is Lord.” “I hadn’t heard music presented like that,” Butler remarked. “You heard that type of production quality in secular music, but this was church music! It reshaped the way I heard music.”

Butler’s admiration of Crouch goes beyond songwriting and arrangement. “Andrae’ Crouch’s mission was to further the gospel not just within the confines of one denomination, or even within the church, but to the world,” he said. “His music has directly affected the soundtrack of the church, and it has also crossed racial lines and national boundaries. I go to Australia and Norway and different areas in Europe, and I can hear the direct impact of Andrae’ Crouch’s music.”

My Tribute has been several years in the making, both in terms of planning and in securing artist contributions. “From Kirk Franklin to Fred Hammond to Kenny Lattimore, Anthony Hamilton, Dorinda Clark-Cole, all of them wanted to be a part,” Butler noted. “Then comes the logistical nightmare of putting all that together. And there’s the creative side—which artist is best suited for what song? It’s not something you can pull together in two weeks!”

In terms of song selection, Butler had recommendations for some artists, while others, like Fred Hammond, knew exactdly what they wanted to contribute (Hammond wanted to modernize “Can’t Nobody Do Me Like Jesus”).

The background vocalists on My Tribute consist of members of Butler’s  background group Levi, other singers from the Dallas-Fort Worth Metroplex, and a choir. “I started off as a choir director,” Butler said, “so the choir paradigm is where I flourish.”

The musicians include those Butler has worked with in the past, including  Michael Bereal, who worked with Andrae’. “These were the musicians who I knew could make it top-notch.”

During production, Butler fell in love with the title track all over again. “’My Tribute’ is a staple of the church, and because of that, you can sometimes lose sight of its epic beauty. But if you strip away the accompaniment, the melody, and the voices, the lyric by itself is poetry. It leads you to God. It is one of those heartfelt messages that you cannot come in contact with and not respond.”

Leading “My Tribute” is an exceptionally talented but relatively unknown singer named Dayanna Redic. Butler learned about Redic “literally through a friend of a friend. She lives in the Oakland area. My friend suggested I check her out on social media. I asked her if she would be a part. She said yes, and it was just like that!”

“His Truth Still Marches On,” included in a Crouch medley on the album, was a new discovery for Butler. “It speaks to where we are as a nation and the world,” he said. Other selections include potential future singles “Oh It Is Jesus,” led by Donald Lawrence alumna Blanche McAllister-Dykes; and “Take Me Back” with Kirk Franklin and Kelontae Gavin.

It turns out that “All Things Well,” the current single from the album, is not a Crouch song at all but a composition co-written by Butler in the Crouch style. Butler considers it a personal ode to Crouch. “Andrae’ directly inspired the songwriter in Myron, and I wanted to have some sort of representation of that on the record.”

Are more tribute albums planned for the future?

“It is my ulterior motive that tribute records become the norm in gospel,” Butler responded. “I don’t think it has to be relegated to one person to do a tribute to a particular artist. For example, how would Fred Hammond interpret the Thomas Dorsey catalog? How would Donnie McClurkin interpret the James Cleveland catalog? It should be the culture we create.”

As for his next tribute album, Butler would like it to be on Thomas Whitfield. “He was the other most impactful artist on me, creatively. To this day, I sit in my music room and play his albums from beginning to end. He was just that wonderful.”

Meanwhile, Butler has made Sandra Crouch, Andrae’’s twin sister and longtime collaborator, aware of My Tribute. He hopes to make a special presentation to her when the project is released.

“It’s important that culture passes down its traditions,” Butler said. “It’s our responsibility to make sure these traditions are not forgotten.”