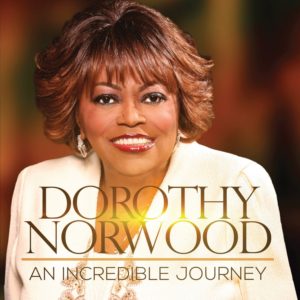 “It Could Have Been Me”
Dorothy Norwood feat. Dorinda Clark-Cole
From the Echo Park JDI album An Incredible Journey
Available on iTunes, Amazon.com

The old-school hand-clapper “It Could Have Been Me” brings together Dorothy Norwood and Dorinda Clark-Cole, two female vocalists representing two different generations but equally powerful when it comes to singing the glory down.

The two are “grateful to God to still be “in the land of the living,” because at any point, they declare, it could have gone very differently. And as the hook expresses, “other people have been through what I’ve been through and they didn’t make it.” The false ending is a technique Dorinda’s mother, Mattie Moss Clark, used to great effect back in the day.