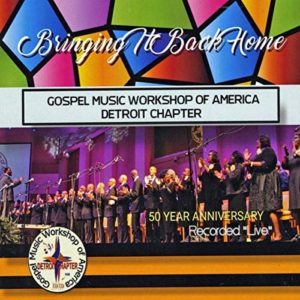 After listening to Bringing it Back Home, I’d say the Detroit Chapter of the Gospel Music Workshop of America (GMWA) has the best choir of all workshop chapters in existence today.

This live album, recorded on the 50th anniversary of GMWA’s founding in Detroit, Michigan, evokes those marvelous chapter choir albums and their Sunday morning-ready songs that were ubiquitous in the 1970s and 1980s.

The album, produced by Stanfield and co-produced by LaValley, opens in a contemporary vein, though a couple of the tracks are updates of classic evangelistic hymns such as “Revive Us” (aka “Revive Us Again”) and “Oh, How I Love Jesus.” On “Revive Us” and “Oh King,” the choir assumes the lush largesse of the Brooklyn Tabernacle Choir.

It’s when the choir digs deep into its Motor City soul that the album hits its stride. Several songs stand out. “Bless the Lord,” based on Psalm 103 and Andrae’ Crouch’s “Bless His Holy Name,” is a worship piece that channels Chicago’s Cosmopolitan Church of Prayer in its rollicking tempo. The celebratory “All is Well” is led by the fiery-voiced Theresa Moss, daughter of gospel legends Missionary Essie and the late Bill Moss. The talented Sherry Nunn Berry leads “At Calvary,” another hand-clapper that reminds listeners of the joy of old-fashioned church singing.

Some slower pieces also contain traditional gospel choir elements. These include “You Have My Yes,” which interpolates the Church of God in Christ “Yes Lord” chant; the Peggy James-led bluesy hymn of gratitude, “Lord I’m Thankful;” and “Kept By the Grace of God,” a “could have been dead, sleeping in my grave” expression of appreciation rendered by Charles Thompson.

Bringing It Back Home is the way gospel music was meant to sound. If sixes were nines, this would be the best gospel album of the year.